A Masonic Lodge In Surrey

With grateful thanks to Tarry Barriball who sadly passed to the Grand Lodge Above in August 2021, one of the original three founders of Oak Tree Lodge. Below is a short history of why and how Oak Tree became a Masonic Lodge in Surrey.

We talk about why it was founded and how we came to use the rituals that we do. Our installation ritual is unique in Surrey, if not the whole of England. 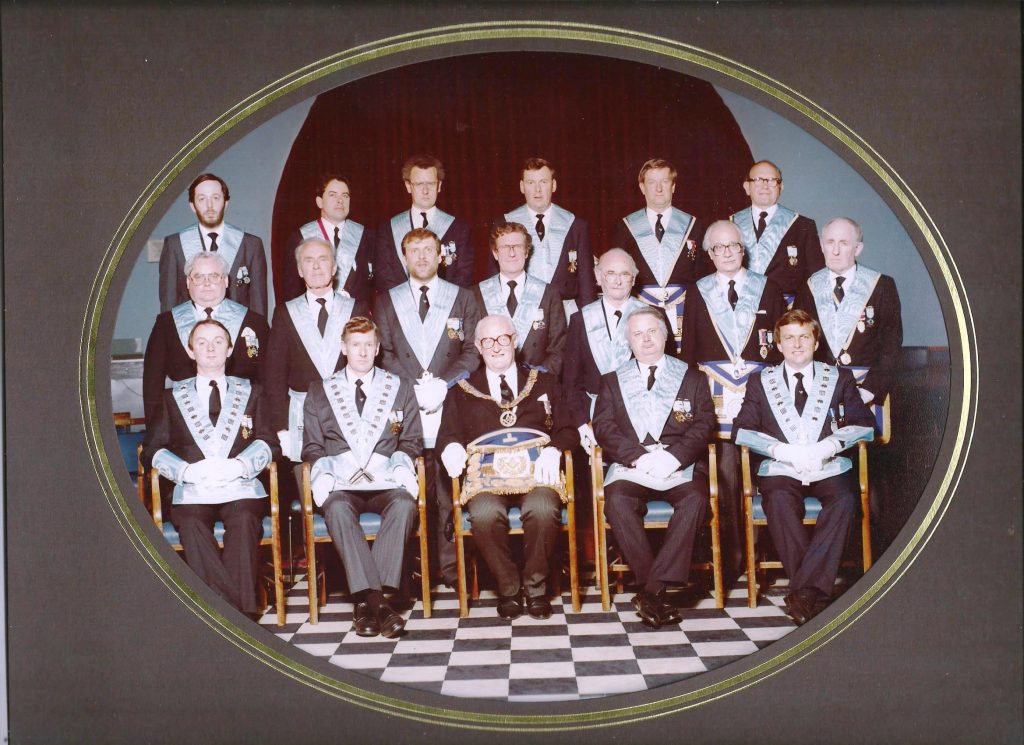 Those underlined are still regular attendees and holders of positions in Oak Tree Lodge.

In the course of his Policing duties whilst stationed at Knaphill, Tarry came across many local residents. In meeting these members of the public, it soon became apparent that many were Freemasons or had connections with Freemasonry.

It was also apparent that many of them were travelling many miles to attend their Lodge. Some traveled as far as; Hertfordshire, Sussex, Essex, and Hampshire as well as across Surrey itself.

Tarry asked some of these people whether they would be interested in forming a Masonic Lodge in Surrey. One which would meet more locally and hence be within easy travelling distance of their home.

The vast majority said, without question, that they would be interested in Founding such a Lodge.

During this time, Tarry would often get together with two other Brethren from his Mother Lodge, St Andrews No: 1046 at Farnham. They would sit in his front room in Knaphill and discuss Masonry, Ritual, and various other topics over the usual glass or two of Malt Whiskey.

One evening in 1986/7 the three of them got around to discussing the prospect of founding a Masonic Lodge in Surrey for local Masons. In one accord, after hearing about the potential numbers of interested Freemasons in Knaphill and immediate areas, it was decided to pursue the matter further.

The three men decided to contact those that had expressed interest by letter and over 100 people were contacted. The letter set out what the expected obligations would be to become a Founder member of such a Lodge.

The initial response was very positive and a provisional list of some thirty-five or so names expressing great interest was created. In the end, twenty or so were prepared to follow through. Gradually the money started coming in showing the support needed. 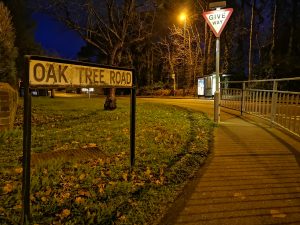 The three principle movers; Bro. Tarry Barriball, W.Bro. Gerry Gleeson and W.Bro. Dave Jelley visited many other Lodges all over the South of England as guests of members of the various Lodges.

The three of them took careful note of the way the “Floor Work” was done and the ritual that was used by the various Lodges. In particular, they were interested in workings which they felt were unique to any Lodge.

Gradually the three put together the shell of the way they would like to see the work and ritual performed. All three were familiar with the traditional Working of Emulation. However, they felt that this ritual was too rigid and did not allow the kind of working that they wanted to see.

They wanted to form a Masonic Lodge in Surrey that was totally different and unique in the concept of Freemasonry and thus make it more interesting and hopefully attract more members and visitors.

At this point, four other definite Founders were confirmed, making a total of Seven who had committed to helping get the New Lodge “Off the Ground”.

Origins of the Ritual

One of these new four was W.Bro Major Charles Bendall. He had been in Freemasonry in his military service years with Perak Jubilee Lodge and they worked a totally different ritual which was not Emulation. Their ritual allowed improvisation and freedom to work both the floor and ritual as the members saw fit.

The Ritual was known as “The Old Revised Ritual” which, as far as could be proved, was worked nowhere else within the County of Surrey and possibly within the UK.

The reason that the Revised Ritual was chosen was that it gave more latitude and freedom in the way the Lodge workings, including the floor work, were done.

This is unlike the Emulation ritual which is fairly rigid with the working all set out in Red Type. The Provincial Grand Secretary and Deputy Grand Master of the Day made it clear that there could be and should be no deviation from the workings as set out in Emulation.

Why The Revised Ritual? – part 1

The Revised Ritual enabled Oak Tree to have more freedom in the floor working of the Ritual. The idea was that we could interpret the actual wording of the Ritual into the Floor Workings.

For example; consider the Lighting of the Candles during the Opening Ode. The Master’s Duty is to

“Represent the Rising Sun to Enlighten the Day, so the W.M is placed in the East to Open his Lodge and Employ and Instruct the Brethren in Freemasonry.”

The Master should be the First to Light his candle in opening the Lodge. It should not be alight when you enter the Lodge.

The taper is then passed to the S.D. whose duties are to

“Bear all Messages and Commands of the Worshipful Master to the Senior Warden and await the return of the Junior Deacon.”

The S.W. then lights his Candle and the taper is passed to the J.D. whose duties are to

“Carry all Messages and Communications from the S.W. to the J.W. and to see that same are promptly obeyed.”

They then both square the Lodge back to their places in the Lodge and the taper is blown out and placed at the side of the S.D.

Emulation would not allow this sort of floor working to be done.

Why The Revised Ritual? – part 2

It is also the same during all the Responses and Instructions. The I.G. actually sees that the Lodge is properly Tyled by Opening the Lodge Door. He visually checks that the Tyler is outside the door of the Lodge and so forth.

If you follow the revised Ritual through the ceremony you will find that the original intention of the Founders was to reflect the wording of the Ritual into the actual Working of the Lodge. Hence the reason that so much of the master’s working is done on the Floor of the Lodge rather than from standing behind the pedestal.

Emulation Ritual would not allow this sort of Freedom and we didn’t want to be just another Emulation Lodge.

Changes to the Ritual

The Founders were all for using the Revised Ritual which, they felt, was far more interesting and had much more content than Emulation, and for a while all the meetings of the Lodge were worked to the Revised Ritual.

There were, however, a couple of Founders who were going to be taking the chair who were members of other Masonic Lodges in Surrey and had always performed Emulation. They were unable to get their heads around the Revised Ritual and wording.

If you’d like to attend an installation (in mid-October every year), do get in touch. 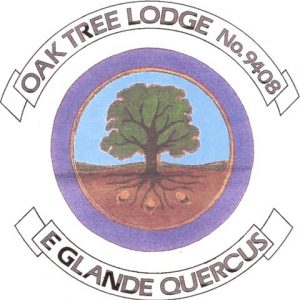 The Lodge Jewel was designed by a young lady that was studying art and design at Bournemouth College. Tarry was teaching her to drive at the time and asked her if she could come up with a design for the Lodge Jewel.

She was given the name of the Lodge as Oak Tree and she took it from there.

If you study the jewel closely you will find that it forms the numbers included in the Ritual. Three can Open a Lodge, Five can Hold a Lodge and Seven or more make it Perfect. There are Seven Roots, Five Branches, and Three Acorns on the Jewel.

She knew nothing about Freemasonry and had no advice other than the suggestion that it be an Oak Tree as the centre part of the Jewel; she came up with the finished design from her own ideas. Needless to say, The Founders thought the design was perfect and we added the scrolled “Motto” into the jewel.

Before this could be formally arranged various other matters had to be gone through including finding a name for the Lodge. The original suggestion came from W.Bro. John Lowery; “E Glande Quercus” of which the literal translation is “From Little Acorn, Oak”. 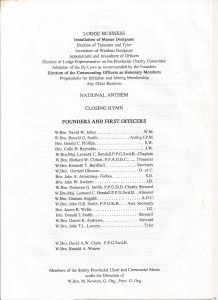 This was put forward to The Province and it came back as being unacceptable as it was a “Motto” and could not, therefore, be used.

It was therefore agreed generally by the Founding Brethren that the name should be “Oak Tree Lodge” as the initial concept was born in a house in Oak Tree Road at Knaphill and two of the principle Founders lived in that road and it, therefore, seemed very fitting and the “E Glande Quercus” would become the “Lodge Motto”.

This matter was put to the Provincial Grand Secretary and was accepted.

All the Officers donated their Collars, Jewels, and Aprons to the Lodge. The name of the donor is engraved on a plate attached to each collar or on the Jewel itself. 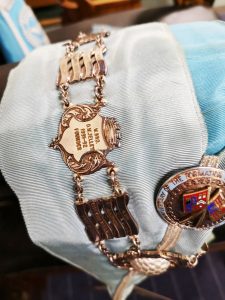 As each collar has twelve shields on, the Collar that the current J.W is wearing has the first 12 Masters Names inscribed on it and the S.W has the next 12 Masters names on.

The Working Tools were donated by Bro. Jim Webb and the box in which they are kept is engraved with a plate and his name thereon.

Lodge of Instruction at least once a month;
September to May